For a man who grew up in a metropolitan area in Japan, I have an intense affection for the midwest, and disdain for those who do not appreciate it. The fact that I live close to one of the cities known for their excellent smoked meats continuously support my views. I was drawn to smoked products from an early age. As a teenager, I often bought smoked eggs from the convenience store as a snack, to my friends’ disgust. Also, the product name of the smoke eggs (kuntama) was very similar to the Japanese term for testicles (kintama) which lead to stimulating conversations such as “Would you like to put my kuntama in your mouth?” which was an added bonus.

Anyway, since I realized that my time in Kansas is running out, I decided to visit as many BBQ establishments as possible. This was also motivated by the fact that a lot of the institutions are not discussed too much on the internet, so I wanted to contribute by throwing in my two cents on some of the places. I have to thank No Bull BBQ and KC BBQ Reviews blog for their extended coverage of BBQ joints, which made choosing places to visit much easier.

So I visited Woodyard about half an year ago, and the constant intake of Hamm’s have somewhat weakened my abilities in remembering, so I would not say that this review is too reliable. 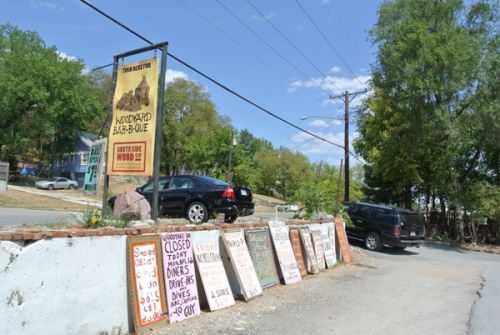 Woodyard is wonderful for its ambiance, which gives you a sense of authenticity or sincerity. Anyway, the place is not a flashy modern joint. Its a charming establishment, but I would have to say being there in the summer heat amidst the flies was a challenging experience. 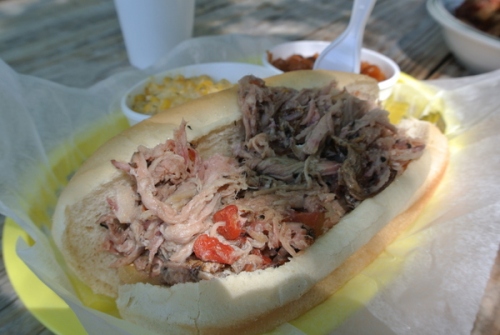 The pulled pork was either unmemorable or just swept away by cheap beer. It had somewhat of a wet mop consistency, and although the smoke flavor was there, it was not too prominent. A little more bark thrown in the mix would have improved things considerably. However, it is partly my fault for ordering pulled pork, when pulled pork is usually the weakest item in any BBQ joint. Texture becomes pretty much indiscernible when the pork is pulled to thin strands.

And then there’s the burnt ends chili. Burnt bits of meat in a lukewarm chili sauce does not sound too appetizing, but the novelty of the combination of deeply caramelized meat and tangy chili kept me going. The quality of the dish itself is not fascinating, but I find myself thinking about it from time to time, wishing I could have a couple spoonfuls of that burnt end chili.

Anyway, I should probably go back to the place. Next time, I’ll be sure to order some burnt end chili with something other than pulled pork.

One last thing about BBQ. At the end of the day, its all smoked meat, so even in a mid-level joint, there’s no way you feel cheated.