Whatever BBQ places I failed to mention: LC’s and Danny Edwards

I moved from Kansas this summer. It was quite a painful ordeal, because I have grown accustomed and developed a strong affection for the Midwest lifestyle consisting of BBQ, observing flat and unchanging landscapes, and twelve packs of Hamms. Now that I am in Vancouver, I have to find a whole new set of things. Friends, a signature dish I can attach myself to, cheap yet drinkable beer, and a place that would offer me employment. I feel that my lingering feelings for Kansas is inhibiting me to pursue these new interests, so I decided to work through my residual emotions by writing about them. And one of the most important topic I have to cover is Kansas BBQ.

Within the landscape of Kansas BBQ, there are two particularly memorable institutions (besides The Stack BBQ, which very promptly earned the position as my favorite BBQ place in KC). One is LC’s BBQ, which is rather well known for its burnt ends. Regrettably, I was not able to make multiple trips to this place (partly because of its location) but their burnt ends left a lasting impression.

I believe that in my post about The Stack, I mentioned that there were two camps of burnt ends. The first are the ones where burnt ends are a by-product of cooking a large chunk of meat, and because of the relative lack of care that goes in to these, they are (often wonderfully) inconsistent. The second sort is (or at least seems to be) made meticulously with great care, with attention paid to moistness, which leads to a consistent, uniform, and beautiful chunks of meat that are relatively free of gristle.

Well, LC’s belongs to the first camp, but it is their inconsistency in the doneness and resultant textures of the burnt ends that makes them wonderful. Some are perfectly done, the meat breaking down in your mouth as you throw them in. Some have yet to experience the breakdown of collagen, and gives a strong, meaty texture and flavor when you bite down on them. And some are cooked to a crisp, with a texture that’s strangely in between beef jerky toughness and cheese puff crunchyness. And very often, these three textures coexist within one chunk of meat, resulting in a wonderful variety of flavors in a bite. These inconsistencies are probably why LC’s receives mixed reviews, but to me, its why their dish remains memorable even after numerous encounters with burnt ends.

Oh, and it also helps that their fries are interesting. Not earth shattering, but interesting. The beauty of BBQ joints is that you get to dip your fries in BBQ sauce. The combination of the thin, crisp coating on these potatoes and the cumin laced BBQ sauce (not unlike Gates, but more subtle) is quite wonderful. 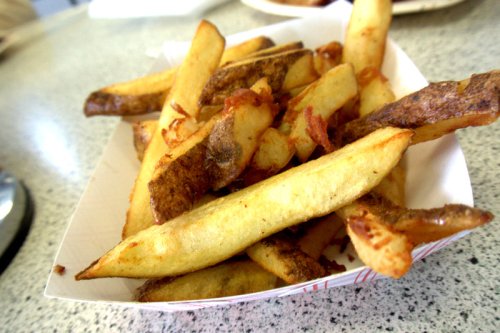 The other place that I often reminisce about is Danny Edwards BBQ. It seems to be ubiquitously well-regarded, and the reason for that is evident in every part of their existence. Its quaint architecture that seems to be a repurposed garage, the clean but not too spiffy interior, the cheery servers that don’t shout at you as you consider what to order (which is a frequent thing in some places) are easy to love. Their meat is also very consistently good, and there I had a wonderfully crusty pork sandwich. And even better, the meat is plentiful.

So plentiful, that I picked up the pieces that fell out of that sandwich, boxed it, and was able to make another heaping bbq pork sandwich at home the next day.

It’s not the end all be all of bbq joints, but if I were to frequent a particular place in the KC area, it would be Danny Edwards. Or of course, The Stack.

Well, but now I’m too far west and too far north to go to either of those places. So I will try to forget.