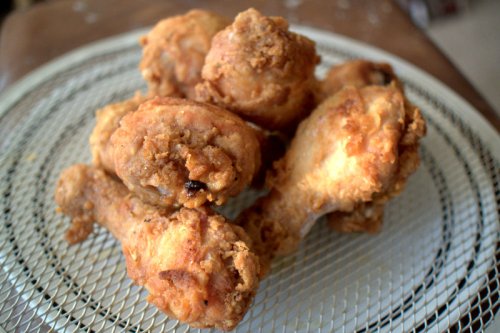 Stroud’s Chicken. What a wonderful feeling it was to live in a state that is known for having one of the most renowned fried chicken in the country.

I had the recipe that the chef provided to some online source, saved as a screenshot. It’s relatively simple, starting with a galic powder, black pepper and salt seasoning, moving onto a egg wash with eggs and hot sauce, and finishing up by coating the chicken with self-rising flour.

The real key is to the frying. When I first ate at Stroud’s, the subtlety of the dish surprised me. The chicken wasn’t about a boatload of spices, or craggy crunchy exteriors. The fried chicken at Stroud’s is all about the chicken. The simple, slight crunch of the batter highlights the moistness of the chicken, which undoubtedly comes from the long cooking time in a skillet, as opposed to a pressure fryer.

So fry the whole thing in relatively low temperature oil, between deep-frying and making a confit. When the chicken comes close to being done, raise the temperature to crisp it up. 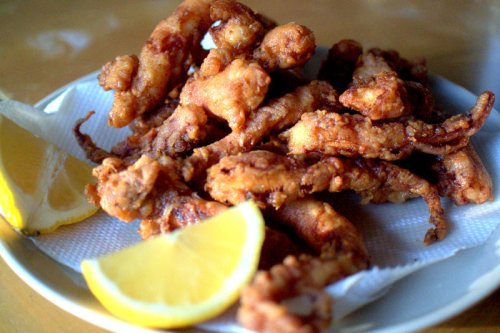 One of the best izakaya style dishes. Low cost, low class, and delicious.

With recent discussions of mouth impregnations by eating raw squid and antibiotic resistant viruses from Korean squid, there may be some fear towards this trending ingredient. But rest assured, separating the legs from the innards will eliminate the possibility of insemination, and deep-frying will hopefully kill off most bacteria. In addition, this dish does not suffer too much from over-cooking, if you are paranoid and tend to cook the shit out of your food.

To make, just marinate in a soy sauce, sugar, sake (or mirin), and ginger mixture for 20 minutes or so. Drain, and toss in cornstarch and flour mixture (50-50 is fine). Let it rest, and meanwhile, heat up oil to about 180c or 360f. Fry until golden. I like double frying, so I throw it in until the batter solidifies, take it out, wait for the oil to heat up again, and throw it in until the color becomes right.

Serve with a wedge of lemon.

Tofu is not a substitute for meat.

Tofu is not a meat substitute.

It pisses me off when an Asian restaurant offers a dish in “chicken, pork, beef, shrimp, or tofu.” It would probably piss me off if I went to a restaurant in Japan and they offered the option to sub beef for chicken or pork in my sliders. Or tofu in my chili.

Tofu dishes can be vegetarian. But a large part of tofu dishes contain meat or fish products in one way or another to add some flavor to the rather bland soy bean cake.

However, stubbornness has never been one of my traits, so let me know if there’s a dish that uses tofu as a meat substitute in a western context, and manages to pull it off.

Agedashi dofu is usually bought in a supermarket fried and ready to eat. It’s more of a side dish that people can just open, dump in a bowl, and throw on the table as an afterthought than a main dish. However, frying the tofu yourself right before the meal makes the dish worthy as a main dish.

Making it is actually extremely simple. Heat up the oil fairly high, about 350 degrees, and throw in the tofu that’s been thoroughly dried on the outside. Have the heat around medium or medium high, and wait until the exterior is browned and crispy. The lower the heat and longer the frying time, the thicker the browned, crispy part becomes.

Throw on scallions, bonito flakes, or anything that you want. My favorite is kimchi and dried anchovy infused soy sauce. I guess that already goes against any notion of authenticity.

The picture above is a Taiwanese fried chicken that I made recently.

After about a decade of cooking for myself, I finally started deep-frying. I’m ashamed that I didn’t start earlier. There were several reasons I had reservations for deep-frying at home. They were

2. There’s the need to use a lot of oil (and hence costly)

3. You can use very little oil, which produces inferior fried food.

5. Cleaning up is too troublesome.

I gradually overcame these ideas, finally arriving at a situation where I deep fry every week or so. These were the reasons I gave home deep frying another chance:

1. I remember very vaguely about some Good Eats episode where Alton Brown said that fried food doesn’t absorb much oil when done right. I forgot the reasons behind this, but if Alton Brown says it, I believe him. In addition, when I only ate fried food outside my house, my cravings for fried food would be so intense that I would only eat fried food. When I went to a gourmet burger place, I got a large order of fries (feeds about 4 people as a side, 2 people by itself) and devoured it. I figured that was probably much unhealthier than frying food at home.

2-3. I figured that to make good fried food, you need a lot of oil. And you do. However, what I did not put into consideration is that oil is dirt cheap. Also, I saw a Japanese food programme (one of those that breaks down cooking scientifically. Imagine Good Eats or Serious Eat’s Food Lab column turned into a TV show) where they found out through experimentation that oxidization of oil does not occur that dramatically, especially when you’re taking good care of the oil, filtering it and keeping it out of sunlight. The show had data of oil used for a few dozen frying sessions. Although I don’t know if I would go that far, I’m very willing to believe anything that is advantageous for my life with fried food.

4. Not really. The thing is, anything breaded and fried is tasty. However, a lot of other ingredients require a lot of steps to make them tasty. With frying, you know that the worst food you’ll end up with is still up to a certain standard. Tempura, for example, is just battered and fried stuff. Very little work needed. But its still delicious.

5. This was the thing that I was struggling with until very recently. Oil splatters aren’t a problem, since I use a 14 inch wok for frying, and there’s very little oil that make it out of that vessel. However, taking care of the leftover oil was a pain in the ass. In Japan, they have these oil pots with built in filters, but here in Kansas, I had no choice but to use two layers of kitchen towels. First, the towels will be soaked in oil by the time I’m done, covering anything that’s in contact with the towels with a layer of oil. This also meant that a lot of the oil was lost, disappearing into the paper towels. Secondly, the oil took forever to seep through, so I took about 20 minutes pouring oil, resting, and pouring oil again. I would have to thoroughly wash my hands in between pouring so that my keyboard won’t be covered in oil. I started to consider using my aeropress to expedite the process, but stopped because I could not drive the image of me, covered in oil after some freak accident. I’ve been covered in vegetable oil before, and once was enough. Washing up using dish detergent is pretty depressing.

However, I recently remembered that I had one of those Swiss Gold reusable coffee filters made out of very fine steel mesh. This was when I had grand plans of having an in-house pourover setup, until I found out the Swiss Gold stuff fits very uncomfortably in pourover cones.

And it worked beautifully. The oil filtered through quickly, even in its cold state. Even though I ran the oil through AFTER I filtered the oil in one of my sloppy paper towel setups, the mesh caught a good amount of fine sediments that the towels somehow did not get. And cleanup was very easy.

I guess I will be frying much more often now. I fear for my arteries. Or whatever mythical organs that get damaged by eating fried food. I’m not going to believe that kind of health nut propaganda.